The Taj Mahal is a tomb situated in Agra, India.

The Taj Mahal was built by the Mughal emperor, Shah Jahan in the memory of his beloved wife, Mumtaz Mahal. It is one of The Seven Wonders of the World and is said to be one of the finest art of the Mughal architecture. The architecture has a mixture of Persian, Ottoman, India and Islamic art. During the year 1983, the Taj became a part of the UNESCO, World heritage Site.

Some of the legendary stories say that after the Taj was built, the Mughal Emperor cut off the hands of all the men who built the Taj so that the same masterpiece could not be made again. The Taj Mahal is located on the banks of the river Yamuna in Agra. It was built in the year 1631 and got completed in the year 1653 spreading over 32 acres of land.

The Taj Mahal is also called the Taj and is a symbol of love and is known for its monumental beauty. Taj is one of the main tourists hotspot in India and anyone who comes to visit India definitely takes a tour of the Taj. The beauty of the Taj goes beyond words and it is said that the place looks magnificent during the full moon night. It is a true dedication to love and romance. The word Taj Mahal means Crown Palace in English and it is made up off mainly white marbles and some colorful gemstones. 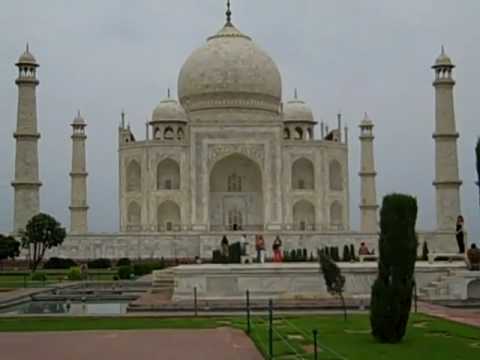